Eight hospitals nationwide took part in ‘The BIG Switch Off’ and demonstrated the positive impact individual actions can have in reducing healthcare’s carbon footprint. Over a period of just three days, the hospitals saved enough electricity to run 97 standard Irish homes for a month.

University Hospital Galway was named winner of ‘The BIG Switch Off’ at an awards ceremony in Dublin. They implemented an outstanding staff awareness campaign and reduced their energy consumption by 10% during the competition period of the October bank holiday weekend.

Regional Hospital Mullingar was named runner up, while Our Lady’s Hospital Navan, University Hospital Waterford and Cavan General Hospital were highly commended. Points were awarded based on the percentage of energy saved by hospitals, as well as for the number of engagement activities participated in.

‘The BIG Switch Off’, run by the Office of Public Works (OPW) in collaboration with HSE Estates, empowered hospital staff to take control of the energy consumed in their workplace by imbedding energy saving habits into their daily routine.

More than 2,000 hospital staff signed a pledge to make an extra effort to switch off non-essential equipment, making a positive contribution in preventing wasted energy which contributes to the ongoing climate emergency.

Congratulating all of the hospitals on their achievements Kevin ‘Boxer’ Moran, Minister of State with responsibility for the Office of Public Works and Flood Relief said, “I am delighted with the success of ‘The BIG Switch Off’ initiative and commend the level of engagement from hospital staff, as it is entirely their small individual actions that have accumulated to make a significant impact on carbon emissions.”

Conor Clarke, Head of Energy Conservation Unit OPW, said “The world will not become carbon neutral overnight, but we can get there if individuals and organisations choose to join the global movement to transform our world. Through our Optimising Power @ Work programme, currently running in 22 hospitals and nearly 300 other government buildings, we will continue to build on the successes of ‘The BIG Switch Off’.”

Speaking about their win Marion Grady, Environmental & Waste Management Coordinator at University Hospital Galway said: “We’re delighted to be named the National winners of ‘The Big Switch Off’ competition. The project has brought about real cultural and behavioural changes in the hospital with staff now approaching the Energy Team with ideas for other sustainability projects.”

“The activities and awareness days run in the hospital as part of the competition were a great opportunity to engage with colleagues from various disciplines in relation to energy awareness and highlight the combined effect of small individual actions.”

Initiatives undertaken by University Hospital Galway included a team of energy champions who led by example. They tapped into their social networks within the hospital to recruit colleagues to commit to saving energy.

By changing our behaviour and taking simple steps such as switching off our computers and printers as we leave the office; switching off lights in offices not in use, turning down the thermostat and ‘thinking before printing’, every individual can reduce their environmental impact and make a difference. 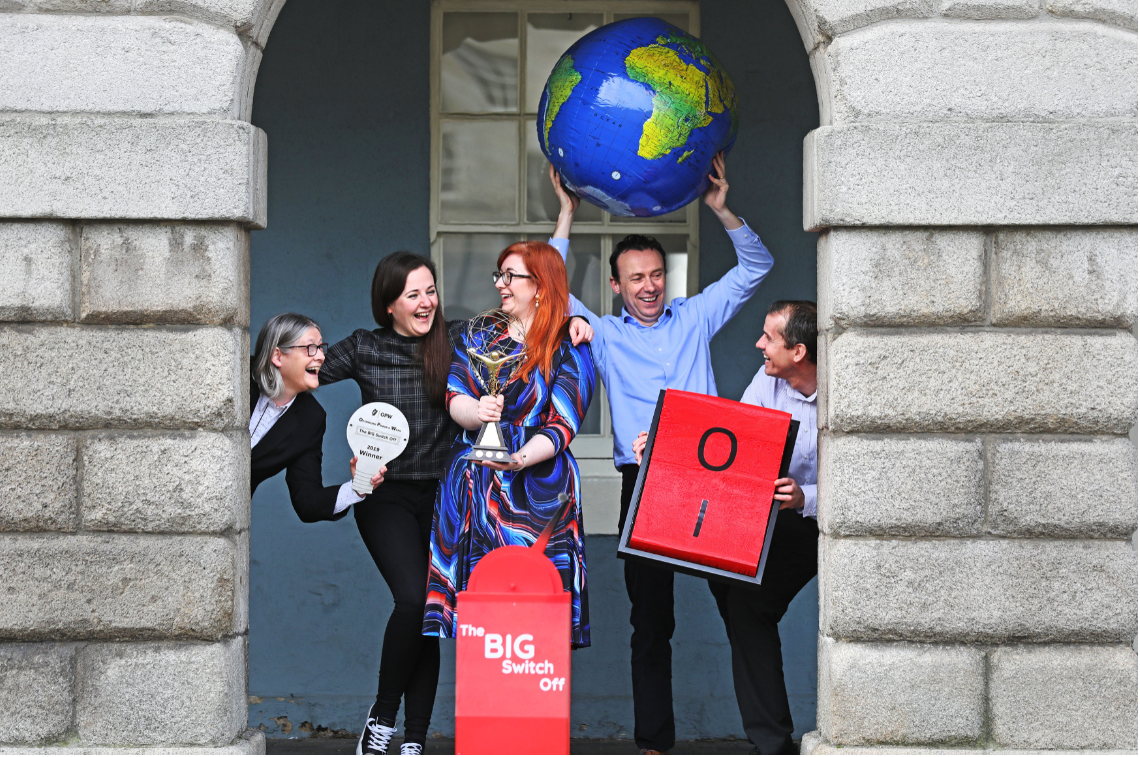 « Unlocking the Potential of Behavioural Energy Efficiency
prev
We use cookies on our website to give you the most relevant experience by remembering your preferences and repeat visits. By clicking “Accept”, you consent to the use of ALL the cookies.
Cookie settingsACCEPT
Manage consent

This website uses cookies to improve your experience while you navigate through the website. Out of these, the cookies that are categorized as necessary are stored on your browser as they are essential for the working of basic functionalities of the website. We also use third-party cookies that help us analyze and understand how you use this website. These cookies will be stored in your browser only with your consent. You also have the option to opt-out of these cookies. But opting out of some of these cookies may affect your browsing experience.
Necessary Always Enabled
Necessary cookies are absolutely essential for the website to function properly. These cookies ensure basic functionalities and security features of the website, anonymously.
Functional
Functional cookies help to perform certain functionalities like sharing the content of the website on social media platforms, collect feedbacks, and other third-party features.
Performance
Performance cookies are used to understand and analyze the key performance indexes of the website which helps in delivering a better user experience for the visitors.
Analytics
Analytical cookies are used to understand how visitors interact with the website. These cookies help provide information on metrics the number of visitors, bounce rate, traffic source, etc.
Advertisement
Advertisement cookies are used to provide visitors with relevant ads and marketing campaigns. These cookies track visitors across websites and collect information to provide customized ads.
Others
Other uncategorized cookies are those that are being analyzed and have not been classified into a category as yet.
SAVE & ACCEPT